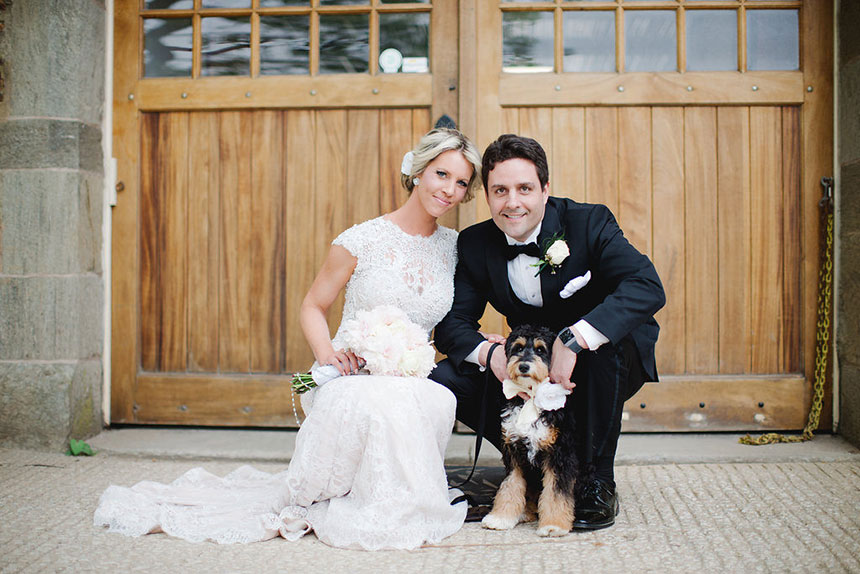 On Saturday, May 5, 2018, Bernadette O’Laughlin and Billy Brown joined us at Radnor Hunt and shared their love for each other with 138 of their closest friends and family. The ceremony, which was held offsite, was truly memorable.

Asya Photography and John Martin of Martin Video joined the family and captured their most intimate moments.

Other vendors who helped Billy and Bernadette’s reception shine and run smoothly included Main Line Gigs, which served as the music and entertainment for the evening. Ali Baba Limo arranged for a classic car to transport the bride and groom from the church to the venue, while Krapf Bus performed guest shuttle service.

The Browns’ special day began when the bridal party arrived at Radnor Hunt around 2:30 p.m. They enjoyed some hummus and veggies before preparing for photos.

The photo shoot had a little bit of everything—including the bridal party, of course. Billy and Bernadette’s faithful companion also joined in on the fun. Radnor Hunt also provided the couple with a rental horse. The stallion combined with the property’s lush green backdrop showcased our grounds’ countryside beauty.

Guests officially arrived at 4 p.m. The grand ballroom was dressed in elegant décor hints like white cotton spun napkins, a white birdcage—which J. Scott Catering provided for the couple to use as a card holder—and floor-length gray polyester linens for guest tables.

Following the first course, guests raised their glasses during speeches made by the father of the bride, best man and maid of honor. After a hearty helping of moving words, everyone was able to indulge in freshly prepared entrees like:

Children were treated to fruit cups followed by spaghetti and meatballs topped in a butter sauce.

Signature drinks were a hit throughout the day. Billy and Bernadette decided on a Kentucky Derby’s Mint Julep Lemonade and The Cinco De Mayo’s Skinny Margarita.

Just as everyone started to digest their meals, the first dances took center stage. It was a beautiful moment that was shared between Bernadette and her father and Billy and his mother and all of their loved ones.

Shortly after the dancing, a cake was brought out for Bernadette’s father to acknowledge his birthday—another important moment worth celebrating.

Then for the other cake—the wedding cake, provided by The Master’s Baker, which featured intricate and detailed yet still delicious flowers.

After the stakes-filled garter and bouquet toss, guests wound down for coffee and cake. The night was filled with dancing, laughter and memories everyone can look back on.

ABOUT
THE SPACE
OUR FOOD
GALLERY
BLOG